Project Renegade is a four-member metal band from Athens, Greece, founded by Marianna (vocals) and Ody (drums) and joined after by Nick K. (guitars) and Jay (bass).

Project Renegade‘s sound derives from an alternative, heavy and groovy background blended with electronic and ambient elements. After releasing their debut EP “Cerebra” the band is mixed its first full-length album “Order of the Minus“. 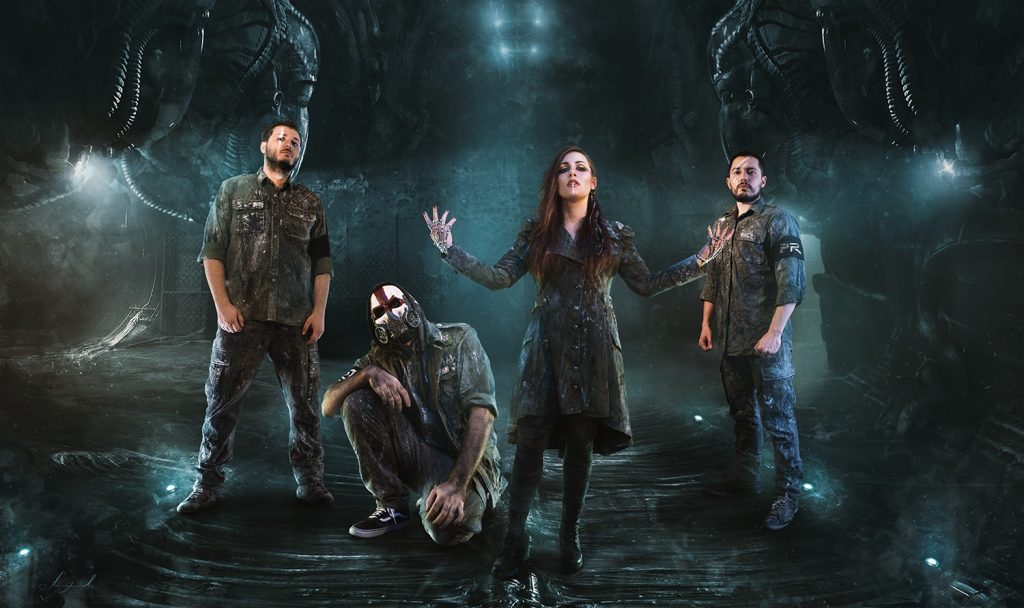 The band is performing live in Greece and Europe, with participations in renowned festivals like Danube Rock Festival (RO), Over the Wall Festival (GR), Iron Queens Festival (RO), Voices of the Succubi 2018 (MT) and the FEMME-Female Metal Event 2018 (NL), Ladies of Metal Festival (GR) having also made a debut performance at Le Cercle Club (BE). On April 2019, they shared the stage of the famous Greek indoor venue “Piraeus Academy 117” with Bullet For My Valentine as special guest and participated afterwards at Milady Metal Festival (IT) with Mayan and Rock’n’Iasi (RO) with Harakiri for the Sky. On September 20th, Project Renegade played as special guest with Evanescence at Kiev, Ukraine.

And now what about their new album that goes public on 31 of October? For a start the album has great artwork. I learn that it’s from Gustavo Sazes. A well-known metal cover artist, google him, he is doing great job. Let’s go to the music now..

Voice balancing between Gathering (track. Sylar), Within Temptation (track. Products of War) and Lacuna Coil. Marianna has a great voice and i think we will see great things in the future (i mean greater!). Explosive and at the same time romantic music between Within Temptation, in small doses of Evanescence (in the way they manage staccato rhythm guitar and voice, track. Respirator), definitely in love with in this moment in tracks like the HIT Liber8 which is also the videoclip of the album. Personally I also noticed small Manson‘s doses in the album’s electronic inspirations (track. In another life).

From a personal perspective I would like more electronic additions as well as atmospheric keys since the compositions actually lift it and can embrace it perfect.

As this is their first recording, I have to say that both in songwriting and in the production, the album moves to a perfectly professional level, above the standard. The work that is done on the videoclip and the visuals indicate that Project Renegade has taken their Project seriously making them sound as Project Professional rather than Project Renegade (lol). Perhaps, I would like a shorter duration, but this is a purely personal view.

If anyone was wondering why they would listen to the record, I’d say if you love female vocals in a nu metal band, listen to Order of the minus. If you are older than 35, it will remind you of beautiful moments from old sounds and make you hit as hard as you need to. Excellent!

Australian extreme metal band BELETH have signed to Wormholedeath Records for the release of their debut album, titled Silent Genesis, due out this June...
News

Finnish metal band Solution 13 have signed a deal with Wormholedeath for the release of their sophomore album “Chapters From Private Hell” worldwide. Band...
News