A first taste of what ‘Tragic Magic‘ holds in store can be ingested now as Spell unveils a video for the LP’s radiating first single “Ultraviolet”. Created by Sean Edwards for Ramble Films (Freeways), the eye-catching clip showcases Spell at the height of its powers. Stream Spell‘s “Ultraviolet” video at: youtu.be/eh-b4JtBjQM “Ultraviolet” explores the hidden terror of forces that rule us but cannot be perceived or understood,” says Spell vocalist/multi-instrumentalist Cam Mesmer. “Our world is shaped by powers that the limitations of our physical bodies prevent us from directly encountering. Will we fall victim to the lust for that which cannot be ours, or harness them to fulfil our wildest dreams?“

‘Tragic Magic‘ is the highly-anticipated follow up to Spell‘s critically-acclaimed 2020 LP, ‘Opulent Decay‘, a record hailed as “fantasy rock” by Blabbermouth, “enchanting” by Heavy Blog is Heavy, and “a captivating mix of Rush- and Blue Öyster Cult” by Revolver. ‘Tragic Magic’ was written and recorded entirely as a collaboration between brothers Cam and Al (Lester); the record’s songcraft is steeped in the atmosphere of the arcane, yet the hooks are more razor-sharp than ever. While influences like the esoteric charge of the aforementioned Blue Öyster Cult and the elemental expansions of Camel and King Crimson drift through these crepuscular melodies, Spell are as likely to be influenced by the life-affirming energy of ’60s Motown, the ethereal dimensions of Cocteau Twins, the strident woe of Candlemass, and the classic songwriting chops of Russ Ballard.

“The themes on this album are more concrete, guided by personal experience,” offers Mesmer. “Tragic Magic’ has to do with mental illness, ageing, the death of a loved one, the decay of time… this is what ‘tragic magic’ means to us – loss and tragedy outside of our control, which fundamentally alters our perceived reality. This album is our response to the world as it currently is: music for an ascetic age.“

“And we couldn’t be happier about the result,” Mesmer continues. “The identity of Spell came into sharp focus as it was always intended to be. Music is magic, and Spell is a spell. Fundamentally, it is a forum to make our dreams come true.“ 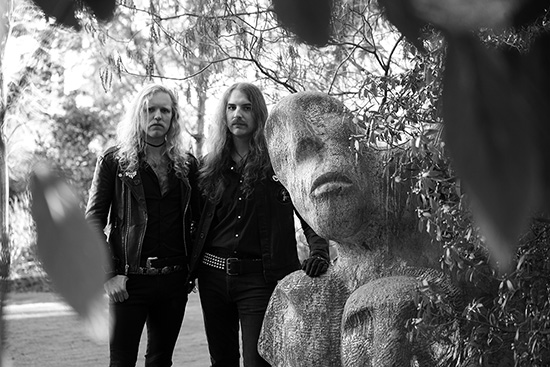 “If this band was a van, they would be the raddest, most pimped out airbrushed 70′s van with plush interior and a BOOMING system. SPELL is a perfect name for them, because their songs are jamming heavy metal magic.” – Cvlt Nation

“If you like your throwback metal loaded with 70s occult magic, this may cast a spell over you.” – Angry Metal Guy

Previous articleDefleshed Announces New Album “Grind Over Matter” for October 28th
Next articleNew Album from Silence Oath : From The Womb Of The Earth. Digital and CD –