It’s been a wild year for He Danced Ivy after re-emerging from a period of productive chaos with their belting new singles Guillotines and Spitting On Infinity, they’re finally ready to reveal their latest concoction.
He Danced Ivy released their new EP ‘Optimistic Cynic‘ on Friday, November 23, and as one final taste of what is to come they’ve released the music video for lead single New Stain; a roaring anthem to holding on through the chaos and hoping for the best.

To celebrate the release of ‘Optimistic Cynic‘, He Danced Ivy are taking to the stage with Satellites, Serene and Blood Knuckle on Friday, November 30 at Crowbar Brisbane.

Despite their quiet period through 2017, New Stain picks up right where He Danced Ivy left off after their debut album ‘The Verbal Kind‘, capturing a chaotic period of their shared lives.

“New Stain was the first track that we put together after moving from Coffs Harbour to Brisbane. The move to the big city was a really daunting affair, Dave moved first ahead of us and over six months we all followed,” said vocalist and guitarist, Sean Rudner.

New Stain is the definitive song of ‘Optimistic Cynic‘, embodying the frustrations and intentions of the EP.

“We really wanted to deliver the feeling of chaos that we felt during the move, holding tight to that manic energy and seeing where it takes us,” said bassist, Mitch Hart.

The lengthy recording process gave He Danced Ivy time to explore their new surroundings, their new attitudes and develop something that really showcases their growth.

“It was really the first step in the next phase of He Danced Ivy. After our first album ‘The Verbal Kind‘, we’d grown so much and changed so much, and the physical move really amplified that,” said vocalist and guitarist, David Cheney.

“There’s shadows of who we used be in there, but we’re older now, rougher but we’re still together, we’re still family and those gang vocals at the end really tie us together.”

Retaining their talent for wild theatrics; New Stain delivers the story of a hopeful soul trapped in the defeated by of a pessimist.

“We always imagine our songs as characters, and this one is the optimistic cynic; they’re promising the world, knowing full well it’s only a matter of time until it all implodes on itself,” said David.

“The whole process was flooded with all these really weird, contrasting influences; there’s a part where this dirty, rough breakdown barrels into the chorus seamlessly, like someone’s hit skip on a System Of A Down song half-way through and now Panic! At The Disco is playing,” drummer, Josh Hayes.

“Queens of the Stone Age meets Every Time I Die vibes… an insane amount of energy on display.”
Alexander Underwood – Pilerats

“The Cedric Bixler-Zavala vibes are definitely front and center, but that doesn’t stop this being as scorching as the kettle he threw at Westfest.”
Gemma Pike – triple j Unearthed

“Combining the most slamming of riffs, the tastiest of drum grooves and the most saccharine-drenched of vocals, He Danced Ivy are here to push genre boundaries to their extreme.”
Bianca Davino – Tone Deaf

“Kinda like standing under a hills hoist clothesline that’s spinning really fast and smacks you with a variety of different cold fish.”
Paul Waxman – SYN Radio

“Sure, their band name may be kinda silly but always remember: never judge a book by its cover because sometimes there is some really good shit to be found within those pages.”
Alex Sievers – Kill Your Stereo

ABOUT HE DANCED IVY

He Danced Ivy are handsomely loud; delivering zeitgeist slamming anthems that blend, defy and flip expectations, genres and planes of existence. Hailing from Brisbane via Coffs Harbour, the four mates serenade each other and the world, living life to the fullest along the way.

Sharpening their live shows with supports slots from acts such as Circa Survive (USA), Protest The Hero (CAN), Dead Letter Circus, Mammal, The Delta Riggs & Caligula’s Horse, plus landing spots on multiple festival line-ups including Brisbane’s Progfest & Banana Field Music Festival, has equaled a bombastic, regularly polished and tight live performance guaranteed to shake even the most stable room. 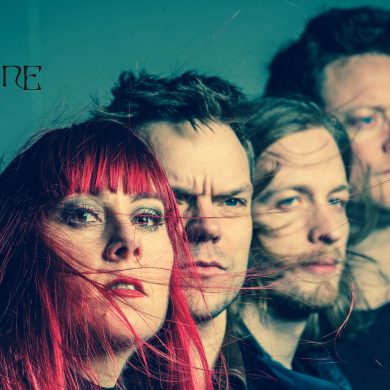