Last October, Armored Saint released their eighth full-length, Punching The Sky, via Metal Blade Records. Today, the band has announced their first tour dates in support of this record: a short run of shows with Black Label Society and Prong in December 2021!

Front-man John Bush comments: “We’re super excited to finally be doing some dates in support of ‘Punching the Sky’!! Albeit a year in two months after it came out. What makes it even more exciting is to support Zakk Wylde and Black Label Society!! Let’s do it!!!!”

See below for all dates!

Leaders and stalwarts of the American heavy metal scene since the early 80s, Armored Saint‘s latest release, Punching The Sky (2020), sees them returning hard. A diverse, attitude-drenched collection, it’s everything the band’s faithful have come to expect from them while pushing their signature sound forward. With Vera acting as producer, he recruited the same engineering team that worked on Win Hands Down (2015) with drums recorded by Josh Newell at El Dorado Studios in Burbank, CA, guitars tracked by Bill Metoyer at Skullseven studios in North Hollywood, CA, and vocals, bass and additional recordings by the bassist at his studio. Mixed by Jay Ruston (Anthrax, Amon Amarth, Stonesour), the record also features a few guest musicians further expanding its sonic palette, the whole thing kicking off with the sound of Uilleann Pipes, Vera finding player Patrick D’Arcy in LA and recruiting him to the cause. Guns ‘N’ Roses keyboardist Dizzy Reed also contributes, Vera giving both him and D’Arcy some general directions and letting them loose, both of them delivering strong performances. The band’s own Gonzo Sandoval plays an American Indian flute on “Never You Fret” – a first for Armored Saint and their drummer. Also Jacob Ayala, the son of a childhood friend who is a drum major in high school, added some marching snare on one of the tracks, which really stands out. 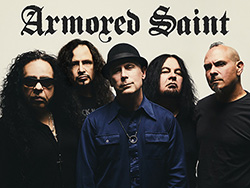 Purchase and stream Punching The Sky now at: metalblade.com/armoredsaint

Rivers of Nihil reveals details for new album, ‘The Work’

Rivers of Nihil reveals details for new album, ‘The Work’